Canadian actor, producer and speaker Chris Young stars as Luis Escobado in the new TV drama Bitten (SyFy), and has also been seen in Rookie Blue, Being Erica, Saving Hope, and many more. His recent work includes a role in Lifetime?s TV Movie ?Aaliyah: Princess of R&B?, which made its premiere on November 15th, 2014. Directed by Bradley Walsh, the movie tells the story of music and video pop star Aaliyah, whose life ended tragically in a 2001 plane crash in the Bahamas. But it wasn?t the first time that Young and Walsh worked together. In 2013, Walsh had directed an episode of ?Beauty and the Beast? TV series, in which Young?s character, Ray Sheckman, a shady club owner, is introduced for the first time in the series, then comes back for a couple of episodes in both Season 1 and Season 2. A born-entertainer and inspirational speaker, Chris has recently started producing a documentary in which he talks to convicted inmates and also goes to high schools and elementary schools to talk to kids about the importance of following their dreams.

Favorite instruments?? Piano! I use to play when I was younger. I know I?ll play it again one day for some role or something, or for a woman.

Sports??? Soccer! Also played when I was younger. I don?t have the lungs for it now though?

How did you get started on your acting career path?? My parents put me into acting classes when I was 5. The rest is history. This is their doing.

Did you have any mentors who helped steer you on this path?? My parents and my uncle Pedro. That man. I love him. He?s been my guru all this time. God is good.

How has your work contributed to your development as a person and the lives of others? ?

Acting shows you really who you are. It?s all about self-discovery. I have a lot to thank for it ? and because I decided to go out on a limb and do what?s in my heart, others have followed. They have either jumped into a class or quit their jobs. Good for you people!

If you had one piece of advice for someone just entering your field, what would it be?? Ha! You better put your entire ass on the line. The whole thing?like, both cheeks. You can?t half-step this, or ANYTHING in life. It has to be your life. There can?t be any other options. And get ready for a longgggg longgggg haul. Still interested?

Do you have a personal work philosophy??? Yes: Do what?s in your heart. Period. Lose yourself. Have zero fears. Accept your destiny. All you have to do is listen. Listen, listen, listen?fearlessly.

What do you do for fun?? Dance and be a clown and make up songs on the spot. I love being an idiot… (see Chris Goofing off in Marbella, Spain)

What motivates or inspires you?? Love. Unity. The World. Healing others. Bringing light, bringing joy. Living life like we?re all going to die. Cuz we are?one day.

What has been your greatest achievement (personally, professionally or both)?? Talking to these kids. I?ve started doing talks at schools. The most gratifying experience of my life. And it continues to grow. I am learning so much from them. They are the future and they’re beautiful to me! They are my gurus. I love them. (see: Chris Giving a talk to the grade 7?s & 8?s in Mississauga, Ontario).

What is the one thing you hope to achieve?? World peace. lol?. you laugh? but I?m serious.

What is your super power? I don?t know man. Being myself.

Who’s your hero?? Jesus. You can laugh again. But that?s who I aspire to be? Laugh again

What are you reading (or watching) these days?? Ram Dass, He?s incredible. A Course In Miracles as well. Powerful, powerful reads. And I watch all the good dramas that are out. I love Oscar quality stuff. Real stories. Stories from the heart. Stories of transformation. Going from the dark, to the light.

Fun fact/anecdote about Chris Young: One time, I was in New York. Broke as a joke. 6 bucks was in my pocket after eating at the Chipotle. I went into the washroom after I finished and I looked in the mirror and said ?God, if you?re still with me, show me a sign?. I took my butt out of there and went to help out a guy on the street corner sell his CD?s. This was 7th Ave and 39th street. I?m hustling these CD?s for this guy and its freezing cold. All I had was my fall gear and it was mid-December. I hadn?t planned to stay in NY, I was living out of my suitcase. So this guy keeps repeating to me all day in Spanish, ?Aren?t you FREEZING. You?ve gotta be freeeeeezzzing?. And I kept on telling him ?I didn?t bring my winter gear man! It?s all good. I?ll get through this?. Throughout the day he offered me his gloves, his hat and money for a hot chocolate. Night had fallen and all these people, tons of people are walking up and down the sidewalk, dressed up as Santa and elves, etc. All of a sudden, the guy tells me ?HEY! Look over there! Grab that!?. I was like ?what??. He points out this thing on the ground for me. I walk through all the people and grab it? It was a sweater (??!!). I bring it back to him, he looks at me and says ?Is it your size??!!? I looked, and it was. He looks at me right in the eyes – he had these crystal blue eyes – and says to me ?Dios esta con tigo?? I had no words after that. All I can tell you is God is real. I don?t ask questions anymore. All I do is listen. Gracias a ti Dios. (Thanks to you, God.)

Hard choice? hmmmm? probably when I decided to drop out of high school in my last year. It was a hard choice because my parents were going to either shoot me or stick dynamite in my lunch for sure. I was convinced I wasn?t going to university, so I didn’t need my last year of high school to go to college. But then I went back anyway and finished. Was it the right move? Sure. I don?t know. I don?t believe in ?right? or ?wrong?. No such thing to me.

What’s next for you? What’s your next big idea, project etc.? We?re going to start visiting jails in the new year. We?re going to go in there and help reform. We treat these people like animals and it doesn?t work. So, we?re going to go in, capture it all and put together a documentary. We?re also capturing the visits we have with these schools as well. So it?s all coming together beautifully. I?ve also got a feature film I?m producing and starring in and a short film – producing and starring in as well – with Ram Accoumeh, who is also directing our documentary. 2015 is a good year.

What one piece of advice would you give to your own son (hypothetical or otherwise) in the hope of making him a better man? He doesn?t need to be better. He is born beautiful. I would only help solidify the person he already is. I would love him to death. I would honor the person he is and cultivate that. So the advice I?m giving through action is ?Be yourself. You?re immaculate and I love you?. He already knows more than me coming into this world. He has all the answers. The internal GPS is clean when we arrive here. But everyone projects their fears onto us, clouding our hearts and causing us to become lost. We lose our nature, which is pure and immaculate and loving. We are divine. ?Son, you are divine. You?re my teacher. What?s your advice for me?? 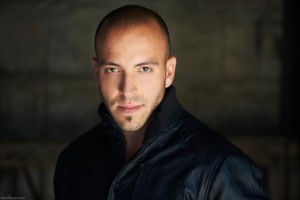 – A short video bio including some of Chris? work.

– Receiving an award from ?La Guia Hispana? for ?Our Best in?Acting?