From the producers of the award-winning television series Degrassi, Open Heart follows Dylan Blake (Karis Cameron), the rebellious daughter of a fractured family of doctors who uses her time as a hospital volunteer to secretly investigate the disappearance of her father. Directed by Stefan Brogren and Samir Rehem, Open Heart also stars The L.A. Complex?s Tori Anderson, Degrassi?s Justin Kelly and Cristine Prosperi.

Mena?s character Jared Malik is the snarky and upfront head of the Youth Volunteer program. He plays by the rules and relishes in the marginal authority his position gives him, but beneath the layers of jerk, Jared has secrets of his own.

Mena?s credits include his roles in television series including Global?s Combat Hospital, Showcase?s King, The 99, and more. Upcoming, look for Mena in the short film Master of None, a comedy heist film created by some of Toronto’s most talented young and upcoming filmmakers.

Freshly graduated from Ryerson University?s theatre program, Mena was born in Egypt and raised in Markham, Ontario. He has always had a passion for health and wellness. Sports like basketball have always been an important part in his life, and during his high school years, he was a member of the Ontario Basketball Association. He has also developed a passion for recreational horseback riding and hopes to one day own his own horses.

I dropped out of Neuroscience at UofT?and started training for film and theatre acting.

A huge inspiration for me was my high?school drama teacher Dori Elliott. She fueled my passion for acting and helped me realize I should?seriously pursue it if it was what I wanted.

It’s helped me break out of the ‘idea’ of who I am and seriously start to explore who I am. Every time I?take on a role I’m learning something about myself and growing as a person.?

The work I do makes me happy and that contributes to my ability to make the people in my life happy.?But I also hope people watching my work learn something about themselves in the process or simply?have an opportunity to feel something. Laugh, cry, get angry, fall in love. 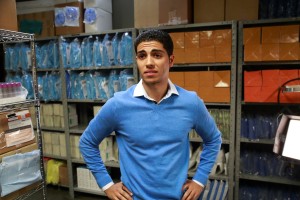 Really try and figure out if this is what you truly want. It’s a hard field that calls for many sacrifices.

Focus and honesty. There’s nothing that bothers me more than when I leave set feeling I wasn’t honest?or focused. I try to sharpen those two skills every time I’m at work.

I go horseback riding. If I can’t do that for whatever reason then I love getting together with friends and?hitting up the movie theatre.

What has been your greatest achievement (personally, professionally or both)?

I don’t really know. I hope to achieve many great things as most people do. I think, right now, my?greatest achievement is deciding and going after what I want to do for the rest of my life.

I hope to establish myself as an actor who’s really freaking good at his craft. I don’t want to have to do?anything but create.

I like to think, sometimes, at really pivotal moments in life I can make?people smile.

My father. He left his home, his profession and his family and moved to an unknown place for the sole?purpose of providing his kids a better future. Everything he has sacrificed, he did for me and my sisters,?and he’s always so positive and happy. You can’t be much more selfless than that.

I’m reading Watchmen and soon starting The Alchemist. I’m waiting for the third season of House of?Cards and watching Marco Polo. Huge shout out to the cast and crew of Polo. They have huge cojones.? 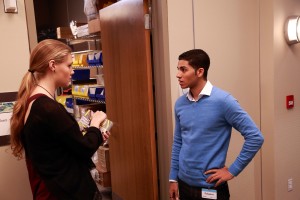 Any advice or life lesson you’d like to?share with our readers?

In grade eight I really believed I was one of the best basketball players on my elementary school team.?It was a really weak team and I played basketball ten times more often than anyone on the team. I?wasn’t a superstar by any means but I’m pretty confident I could have really helped my team. I never got?to play because my coach didn’t see me as a basketball player. He knew nothing about basketball and he?didn’t really care.

During the very last game I ever played in elementary school we were getting our butts handed to us.?We were down by fifteen points with two or three minutes left in the game. Our coach had given up at?that point and he decided to throw me into a hopeless affair. In one way or another I contributed to all?the points we scored in those last two minutes whether by assisting or scoring. I was shooting, driving,?delivering behind the back passes – stuff I didn’t even know I could do. We came back with ten seconds?to go, or something like that, and were down by two points with possession. There was no doubt in?anybody’s mind I was going to get the ball. I even think the other coach was really dumbfounded as to?why I hadn’t played earlier. He probably thought I was being punished for biting some other kid’s ear?off or something. Anyway. Ten seconds left, we have possession coming out of a timeout and the ball?is going to me. The inbounding player steps on the line and we don’t even get the ball. It’s a violation?and the other team gets possession. Needless to say, the game was over. Half the players on that team?didn’t even know how to play basketball but I never got a chance because the coach didn’t ‘see me’ as?a ‘basketball player’.

Ten years later, I decide I want to go into a business where all people do day in and day out is decide?whether they see you as something or other. It’s quite ironic actually. My point is that, when it comes?down to it, it doesn’t matter how people see you or who they think you are. As long as you are confident?as to who you are and what your abilities are then eventually you will succeed. Even if it’s in the last two?minutes of the game when you’re down by fifteen.

Thinking back to a time when you had to make a hard choice, how did you decide, and do you feel, in?retrospect, that you made the right move?

I decided to give up all that I had studied in high school and one year of university to pursue acting?instead. Five years of really giving it my all to the maths and sciences and the very real risk of?disappointing my family. I went with my gut and it hasn’t let me down. I made the right move.

No. I’m trying to eliminate the phrase “I wish I would have” from my vocabulary.

I’m working on a short film with a few friends titled Master of None. We’re really pushing the?boundaries and trying to show people what we can do with our own resources. Original screenplay,?music, direction, acting – everything.?After that, we’ll see were the wind blows.

What one piece of advice would you give to your own son (hypothetical or otherwise) in the hope of?making him a better man?

I would tell him that sometimes there comes pivotal moments in life, that are life-changing. They don’t?happen often and they aren’t obvious, but when they happen you should let your mind take a back seat?and follow your gut.