I first met Emy Stantcheva?as my contact point for an interview I did for this column last year (with singer/songwriter Basia Lyjak). Since then, we’ve hung out on Facebook and had our fair share of laughs — and disgruntled bitch sessions — over the state of independent music in Canada. One fantastic thing about Emy is that she’s always well-informed, media savvy, and ready with a keen insight into what is and what isn’t in the world of music.

As her network has grown to include some pretty cool names in internet-based entertainment journalism (like, say, her friend and fellow Addict?Nadia?Elkharadly), her finger rests squarely on the pulse of Toronto’s indie scene. Part rocker, part professional, and 100% fox, Emy is what that scene is all about.

Education: I studied French, Spanish, Italian and Portuguese at the University of Toronto and Music Business Administration at George Brown College. I also dabbled in a few wine and cooking courses. 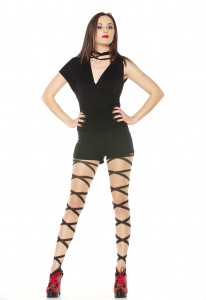 It started off pretty innocently ? a friend of my ex-boyfriend asked me to help with a music festival he was putting together with some copywriting when I was 20 and still at U of T, and that was my first taste of the industry. Later that year, the same ex-boyfriend became lead guitarist for a singer named Basia Lyjak (previously featured here!), and she asked me to help her re-write her biography. It just snowballed from there, and before I knew it, I was making stuff up as I was going along in this sort of co-managerial role with her as we both tried to figure out how the eff the industry worked in a strange and transitional time for it. It became really consuming. I in her, I saw exactly what I’ve been wanting in a female rock vocalist, and the idea of helping her build her career excited me a lot. Rather than just be disdainful of popular music, I could help her offer up something better to the world.

I suppose that, under the guise of ‘writer,’ I could call myself an artist. I’m really weary of defining myself as that – everyone’s a writer these days, or photographer or model or publicist. I just know that when something sets me off, I have a way with words and I can spout off a mean rant. Anything I write – aside from at work – I write pretty much only to expel something from my system and it’s entirely selfish in its purpose. So, I’m not gonna lie, it’s pretty awesome when people tell me I made them laugh or they love how I phrase and describe things, or that they’d buy my book if I ever wrote one, because I probably only wrote it to satisfy myself in the first place.

Good music, things that infuriate me (animal rights, religion, out of control ignorance). Bourbon and wine don’t hurt either.

If it were up to me, I’d just be a lazy otter that floats around in tropical water all day, so for the most part, it’s just buck up and get ‘er done.

Maybe I’d be a sommelier or holistic nutritionist. Or if I could get it together and learn how to use my sewing machine, I’d learn how to make tights and sew my little face off. I can’t quite afford my Black Milk Clothing obsession just yet so I should probably just create my own legwear empire.

Aside from my day job, I recently joined the Addicted Magazine staff as Lifestyle Editor, so I’m hoping to ramp up my writing output this fall. I want to cover a lot of vegan and healthy lifestyle trends and products. Basia (Lyjak) has a new EP and some new demos ready to go, so I’m excited to see where we can take that, and I take copywriting gigs on the side.

Physically? Lips. I love a good set of lips. I’m drawn to approachable guys who can just be themselves and not take themselves too seriously.

I love funny people who are easy to talk to, so some good banter gets the ball rolling. Also: proper spelling. When I see a dude correctly spell a word that most people butcher, or use the subjunctive in a sentence or something, I get lightheaded and swoony. 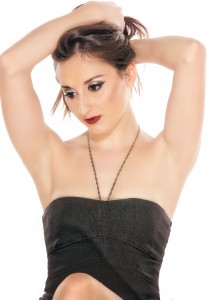 I’m basically looking for a funny, witty, non-smoking vegetarian or vegan who will listen to Soundgarden and act like a goober with me. I also surprised myself last year to find out that I enjoyed being around someone who challenged me and didn’t always acquiesce to my preferences. It’s important to have common interests, but also really awesome to discover new things through another person.

Moping and manbaby behaviour, smoking, arrogance, no sense of humour. If a dude rags on me for being a vegetarian and fancies himself clever, he probably shouldn’t even bother. Sincere belief in any organized religion is a definite deal breaker.

Lips, smile, confidence, humour, trucker mouth, love of rock n’ roll. Someone who has their own thing going and doesn’t need to cling. Critical thinking is pretty sexy. You should probably also like cats, because we’re gonna have some real problems otherwise.

Did I mention that moping isn’t sexy? Cigarette mouth, dudes who prefer to wallow rather than problem solve, and trite as it sounds, guys who are super into playing games and acting like they produce more eggs in a day than I do in a month can just get bent.

To stay in shape, what’s your basic diet look like??

I’ve been a vegetarian since I was eight, so, 19 years, and now I’m a struggling, wannabe vegan (I’m Bulgarian, so proper “feta” cheese is my undoing). I’m big on reading ingredients when buying anything and making sure there aren’t a ton of unnecessary toxins lurking in a product. I love cooking, so I make most things from scratch and don’t keep bready stuff at home. Most of the time, I go through the aisles of the average grocery store with the snottiest look on my face because I can’t understand how 95% of the stock is considered, in any way, edible. I just try to keep what I eat clean and simple – lemon water in the morning, smoothie, matcha and water all day, big salad for lunch. But I’m not militant about it 24/7, I’ll eat junk every so often, because being well-behaved all the time is tedious and excruciating. I love having leftover shame poutine for breakfast on Saturday mornings. 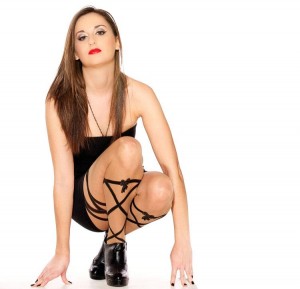 I’m terrible with regular fitness. I used to be a swimmer, so unless I have a scary Eastern European trainer yelling at me, I’m not that motivated, (save for when a beachy vacation is coming up). I’ll go to the gym a lot for a few months out of the year, then give up and pass off walking everywhere and using the stairs to go up 14 storeys to my apartment instead of the elevator as exercise. Also: dance nights and clenching my buttcheeks dramatically when I walk.

Now you’ve got me thinking about that legwear empire. Because the 230 pairs of pantyhose, leggings and tights I currently have aren’t enough.

Favourite workout tip:?Can’t say I have one. I go by the things I learned training as a swimmer and taking Tae Kwon Do and do my own thing. Just challenge yourself a bit more every time and don’t start out trying to be a hero – you’ll burn out and give up pretty quickly that way.

I could eat tomato sauce 24/7, and once I realized it was damn near impossible to find ready-made sauce that wasn’t full of sugar and other junk, I learned to make it myself with fresh tomatoes.

– a bunch of tomatoes, flashboiled or roasted and blended
– onion or leek and lots of fresh garlic, sauteed
– simmer the tomatoes for a while, add sea salt, pepper and spices to taste
– add some chopped fresh rosemary near the end (don’t let it get brown)
– if you’re not vegan, melt some burrata in
– drizzle tons of olive oil

I suppose you could serve over pasta. Personally, I could just drink it like soup. So easy and so delicious.

iPhone or Android:?Pretty sure I’m going end up with iPhone-shaped cancer in my left hand.

What are you driving:?I’ve lived more or less in downtown Toronto since I was 5. I have no idea how to drive.

One thing guys should know when talking to a beautiful woman:?Just be normal. Don’t be cheesy. Also, don’t passive-aggressively try to bring her down to big yourself up in a spectacular display of your own self-consciousness. That’s not cute.

I was an extra in Frankie Whyte and the Dead Idols’s video for Keep Walking a few years ago, and it was an outdoor shoot in December. I’ve never been so cold in my life. I don’t mean for that to reflect negatively on the crew at all; she’s one of my oldest friends and it was a blast with a lot of awesome people, but it took me a good two days to warm back up.

Can’t say I get interviewed a lot and my big secrets are out/often precede me (I’m a crazy cat lady and have an unhealthy obsession with Soundgarden), but when I was a toddler in Bulgaria, I had an imaginary enemy named Six. He was a robot who stalked me, so I used to sleep with my arms holding my blanket over my head. He didn’t make the trip over the Atlantic with us, but my girlfriends told me they’d wake up to me sleeping with my arms in the air up until I was about 15. Is that quirky or just unsettling?

iThere are no comments