Nerd guys like to think they’ve got the market cornered on geekness. But realistically, they have their own selection of unbelievable babes to dream about: Lexa Doig, Jeri Ryan, Lucy Lawless, and yes, even Carrie Fisher come to mind. But out here in the real world we know that superstar heroine sci-fi babes don’t necessarily populate the Cons or D&D parties with as much frequency as we might imagine. Except…that might not actually be true. Enter Tracy, aka “Hot Nerd Girl,” a vanguard in the fight to bring geek-chic to the fem side.

With her wildly successful blog and her even more triumphant social media following, it’s not surprising that HNG has become one of the coolest web phenomena in a long time. Live long and blog. 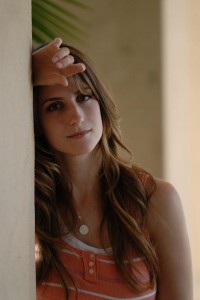 Education: San Francisco State University (it was the closest I could physically get to Starfleet Academy?no, really?)

I got measured for a bridesmaids dress once and the seamstress made a weird noise when she took the last measurement. I thought something was wrong and asked her if everything was ok. She looked at me like I was a three-headed martian and told me that if Barbie were real she?d have my measurements. I never liked or paid attention to Barbies so I kind of sheepishly told her that I was sorry. She laughed and apparently decided that she liked me after all because she was really nice to me for the rest of the appointment. 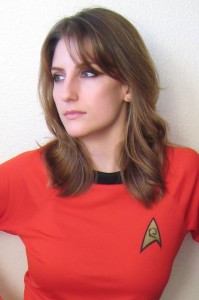 I started writing a blog in August 2009 and decided that I wanted to write about something else. I wrote a post on facebook asking what I should write about and what it should be called. I was constantly bombarding my friends and family with all of my nerdy obsessions but I had never thought to write about it because it?s such an ingrained part of who I am. It?s not something I do or pursue, it?s just me. So when a friend suggested that I stop bombarding them and start channeling it into a blog it was kind of an ?oh duh / ah ha!? moment and I haven?t looked back. The friend suggested the name ?Hot Nerd Girl? and it took him a while to convince me to use it. I thought it sounded way too pretentious but he insisted that it was simply the most straight forward name. It?s growing on me but I usually abbreviate it to HNG.

So many things. I?m a very creative person. I studied theatre, dance, and voice for most of my life. I?m very into arts and crafts, painting, photography. I?m constantly inspired by everything around me which is why my office is packed to the gills with posters, action figures, model starships and a vast array of fake weaponry including 5 lightsabers, 2 Mjolnirs, 2 axes, a sword, a wand, a phaser, a glock, katanas, and an assortment of knives ? if there?s ever a fake war, I?m your girl. Writing the blog definitely allows me to focus a lot of those creative juices. When I get an email from someone who really appreciates my writing I get crazy butterflies in my stomach. There?s nothing like it. 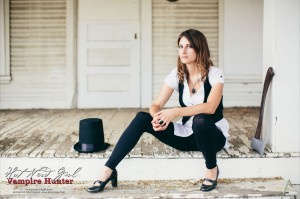 I read a lot. I find books to be extremely inspiring. A great book, movie, TV show, or comic will send me on an emotional roller coaster for days. I?ll obsess over every detail and hunt down anyone I can find who will discuss it with me. I get so sad when I finish a favorite story because I feel like it?s the end of my story. I relate to so many fictional characters. Way more than I relate to real people. 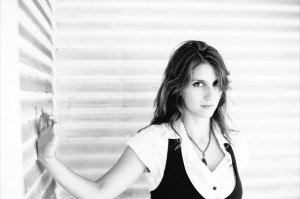 I try (but don?t always succeed) to write a little every day, whether it?s for the blog or for one of my other projects. Even if it?s just a sentence or two. As long as some progress has been made, it?s been a successful day and I?m moving forward. Sometimes I can?t write sequentially and I?ll skip forwards or backwards and then meet up with my stopping point a week later. If I find a jolt of inspiration I roll with it no matter where it takes me.

Organizing and running a comic book or sci-fi convention. Maybe working for Peter Jackson or Sam Raimi, someone who works on films that give me nerdgasms.

When I?m not working on hotnerdgirl.com I?m working on another writing project that I?m not discussing yet. I?m a little superstitious thanks to my Bohemian blood and once I talk about it, it will lose its magic and cease to exist. It?s happened before and I?m terrified that it will happen again. 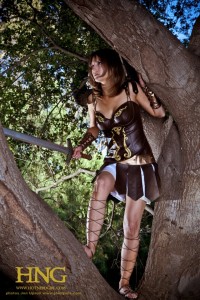 I can pick out a nerdy t-shirt from a mile away. If I see one it?s the only thing I?ll notice in a crowd full of people. If clothing isn?t a factor either because I?m at a Con and everyone?s wearing something nerdy or at a bar where no one is (except me, most likely) then I notice eyes and smile first.

I?m very shy, almost painfully at times, but I perk right up if someone mentions Star Trek or Star Wars or Lord of the Rings. Guys don?t have to be nerdy, I?ve dated my share of Muggles, but it certainly helps to break the ice.

A great sense of humor is key. I need to laugh, early and often, otherwise I get bored. I like to go on adventures but I also need to be left alone to read and write and watch reruns of Buffy. My S.O. gets all of that and is of a similar temperament so we have found a great balance.

Drama. Ugh. I hate drama. I have a quota of one dramatic friend and it?s been filled. I hate gossip too. If someone is only interested in sitting around and talking crap about other people I will get up and leave. Life?s too short for that shit. I am very loyal and supportive and I like to surround myself with people who are the same. I think I project that pretty well because the vast majority of the HNG fans have been absolutely wonderful and I am so grateful for that. 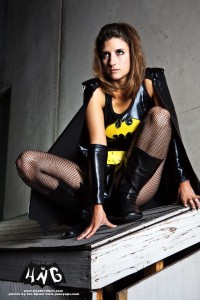 Pretty eyes and a great smile go a long way. Nerdy accoutrements will get you bonus points. It?s very rare for me to get out-nerded so when it happens I get super excited and want to pick their brain for hours. I?m all about girl power but I like a guy to be a gentleman. I?m always doing things like holding doors open for people and walking them to their door. People think it?s funny since I?m a girl but I always tell them that my mama raised me to be a gentleman. Call me old fashioned, but I at least expect good manners.

People who are loud, obnoxious, and/or trash-talk. I can?t stand it when people make fun of or bully others. It?s revolting.

I pretty much eat whatever I want. I try to keep things in moderation but I have a massive sweet tooth. I only like healthy food if it tastes good. I like to try new things but I?m definitely not a foodie, I don?t seek out certain types of food or go to fancy shmancy restaurants. I know what I like and I pretty much stick to it.

I try to go to the gym 2-3 times per week. I usually just tag along with my S.O. and he tells me what to do. I?m typically one of only a few girls in the weight room which can be intimidating but my mama always tells me to be ?big and brave and bold? and I try to live up to that. I?m going to try doing more cardio. I like going for walks. I busted my knees running cross country and doing dance and gymnastics for years so walks are great. I stretch every day, usually while I?m watching TV or reading.

I?m working on expanding the blog. I?ve had some HNG t-shirts made for myself and I get asked a lot about where people can buy one so I?m going to attempt some minor merchandising. We?ll see how that goes. I?ve got the writing project I mentioned earlier. Mostly I?m just being myself and enjoying the ride.

I have these great arm exercises that my TV reporter bff taught me. They are great for toning your upper arms. Hold your arms out straight to the side like you?re trying to form the letter ?T? with your body. Keeping them straight, move them up and down like you?re flapping your wings. Do that until it burns. Then adjust so that you?re moving you arms backwards and forwards, like you?re wading in water but continuing to keep your arms straight. Do that one until it burns too. Then, with your arms still straight and out to your sides, adjust so that you?re holding an imaginary door knob in each hand and twist the door knob back and forth, back and forth until it burns. Do that whenever you?re sitting and watching TV or whatever.

I don?t really cook. But I do have some ?Cooking with Hot Nerd Girl? segments that prove I can make beverages pretty well.

iPhone or Android:?I?ve been an iPhone girl for a long time but I might switch when my contract is up. I?ll see what?s out there when the time comes.

What are you driving: A Honda that wishes it was a TARDIS.

One thing guys should know when talking to a beautiful woman: Just be nice and smile a lot. Ask a question and really listen to her answer without talking over her or verbally trampling her because you only asked the question so that you could talk about yourself.

I?ve always had really great experiences on sets. Sometimes it?s embarrassing when you need help getting up into a tree or on top of a roof for a shot and you?re flashing everyone your underwear but, being a theatre person, I?m pretty much over getting embarrassed about stuff like that.

I?m a proud Navy brat and my family is full of military personnel, including my brother who recently got back from his 2nd deployment to Afghanistan with the USMC. I?m very passionate about helping and supporting active and retired military and their families. My favorite organization to volunteer with is Operation Gratitude (www.opgratitude.com). I encourage everyone to check it out and get involved. They are an incredible group of people and I?m very proud to be a part of it. 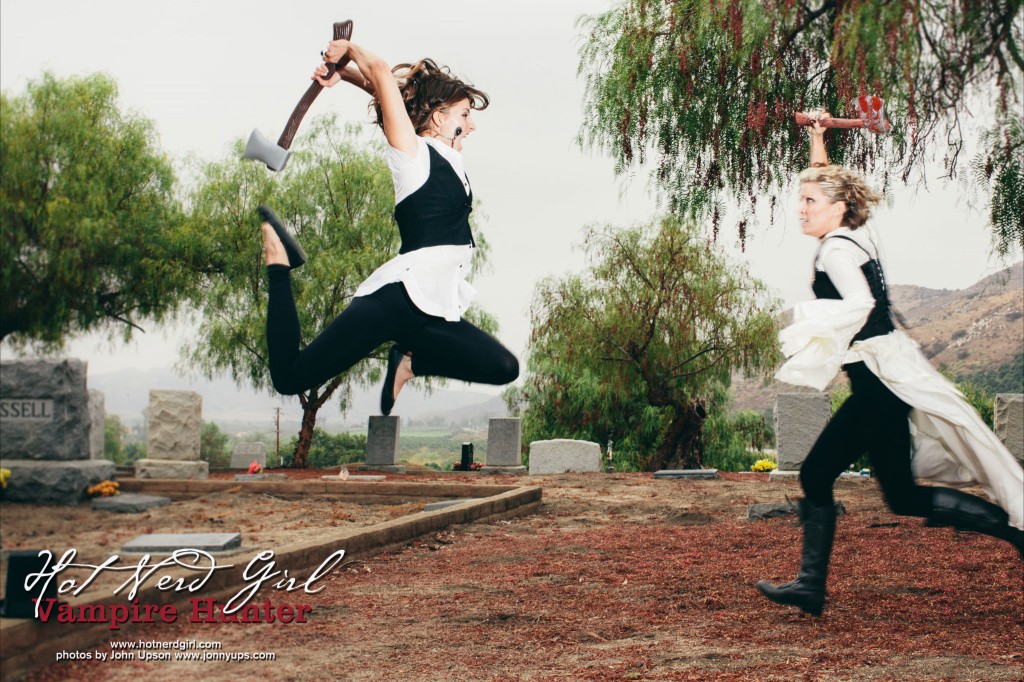