Canadian readers will likely recognize Paula Brancati for her portrayal of ?Jane Vaughan? on the internationally acclaimed Degrassi: The Next Generation and her work on the Emmy-winning series Dark Oracle. Both roles garnered her Gemini Award nominations for Best Performance in a leading role. She is currently filming Season 4 of the CBC hit series Being Erica which premieres on Monday, September 26, 2011 at 9 p.m.

Graduating from television to the big screen for Moon Point came easy for Brancati. In 2003, she starred in the feature film Cold Creek Manor featuring Dennis Quaid, Sharon Stone and Twilight?s Kristen Stewart. In addition to Moon Point, Paula can be seen later this year in the ABC Family romantic comedy Desperately Seeking Santa. 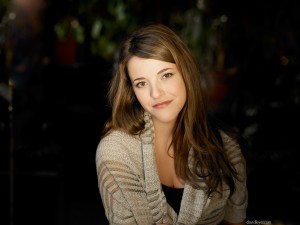 I started out doing community musical theatre. When I was 9, an agent approached me after a performance and asked to represent me. I booked a few roles here and there, but it wasn’t until I got my first lead in a series when I was 13 that I really grew to love acting and knew I had to make it my full fledged career. I was so excited to get to set every morning, meet so many different kinds of people, and portray colourful and layered characters. I think what appealed to me first and foremost as a kid was being able to live vicariously through the characters I played (that is still one of my favourite parts of acting!)

Knowing that a character you played or a scene you portrayed honestly resonated with someone, is incredibly rewarding. Getting people thinking, asking questions, feeling something – that’s what’s most exciting to me.

What inspires you in your work?

Work hard, be kind, stick to your moral compass, be a person of integrity. Be the kind of person you would want to hire for a job!

I’ve always seen myself working in some facet of the entertainment business. Producing is an area I have begun to dip my feet into and really enjoyed.

I have a few projects brewing… I am itching to get back on stage and do a play or a musical sometime soon. It’s also been great to have time to focus on singing and the music end of my career. As of late, I have been recording some original material and playing soul/R&B gigs around Toronto with my brother. 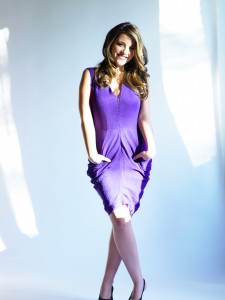 Physically – Eyes/jawline (who doesn’t love a strong jawline with some stubble?)

A man who knows how to cook

Arrogance. I like a dude who doesn’t take himself too seriously.

Mediterranean diet! Glass of red wine, lots of water, everything in moderation.

I’ve started working with a trainer which has helped me integrate fitness in my day to day life. It can be challenging but I feel more motivated to stay active consistently. I’m a big fan of ab work. I also love hot yoga – great workout and a good way to unwind after a crazy day.

I want to continue to play roles that excite/scare me. I love a challenge. It’s hard to find material for women in their 20’s that is interesting/complex/inspiring. So I hope whatever I work on next is all of these things! I’m certainly seeking out those kinds of characters.

Favourite workout tip: Breathe! (Seriously… I forget to do this sometimes.)

Favourite recipe: Fresh tomato sauce. Crush plum tomatoes and saut? in a pan with olive oil, garlic, basil, salt and pepper. Throw on top of some spaghetti and enjoy!

iPhone or Android: I’m a rookie iPhone user. Am I allowed to admit that I don’t love it yet?

What are you driving: Mazda 3

One thing guys should know when talking to a beautiful woman: Be engaged and be yourself.

I used to be on the chess team in grade school. It was a ploy to stay inside and warm during recess. Toronto winters are COLD. I joined the stamp club for the same reason. I can’t say either of these ventures upped my social ranking…. but yes, I was warm.